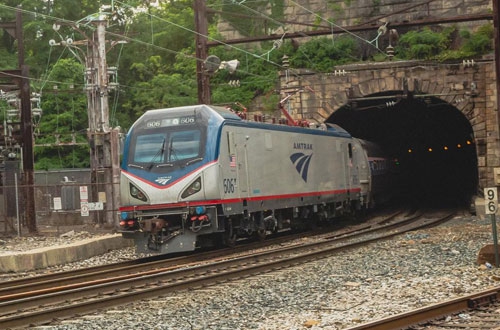 Four new one-track tunnels should be bored to replace the existing Baltimore and Potomac (B&P) Tunnel according to a Record of Decision (ROD) issued by the Federal Railroad Administration (FRA) on March 31.

Issuance of the ROD by FRA concludes the National Environmental Policy Act (NEPA) Environmental Impact Statement process on the initiative.

The federally-funded engineering and environmental study identifies the selection of the Preferred Alternative (Alternative 3B), the four one-track tunnels, to improve rail service and reliability on the Northeast Corridor (NEC) and addressing a longstanding bottleneck. The projected cost, which has not changed since the Final Environmental Impact Statement (FEIS), is an estimated $4.52 billion. Funding has not currently been identified for final design and construction of the project.

Alternative 3B also includes three ventilation facilities, one each at the North and South portals and an intermediate ventilation facility sited at 900-940 West North Avenue. The FEIS and ROD both established numerous mitigation strategies to minimize the project’s impacts on surrounding communities, both during construction and after the new tunnels are operational.

In accordance with NEPA (42 USC § 4332 et seq.), the FRA coordinated with the Maryland Department of Transportation (MDOT), Amtrak and the Baltimore City Department of Transportation to issue a Draft Environmental Impact Statement (DEIS) in December 2015. The DEIS evaluated the environmental impacts of three build alternatives and a No-Build Alternative.

The FRA and MDOT issued the FEIS in November 2016 and held two public information meetings in December 2016. Over the course of the three-year study leading to the release of these documents, the project team engaged the public by hosting more than 20 open houses and community outreach meetings and hearings, publishing newsletters and maintaining the project website, www.bptunnel.com. Project partners said they are committed to ongoing public outreach as funding is provided to advance the project.