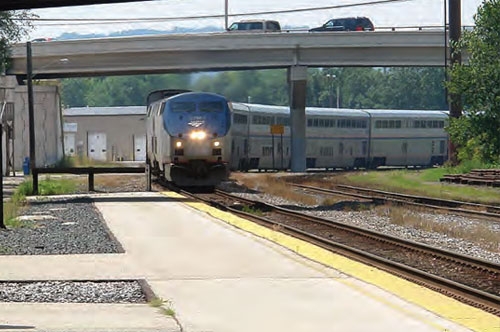 A study by HNTB Corp. indicates that a passenger train linking New Orleans and Baton Rouge, La., on existing freight tracks, with stops in between, could begin two daily trips, ultimately growing to regular service with a possible station near the New Orleans International Airport.

Supporters say a passenger train service would allow riders to work during commutes, offer an evacuation route during hurricanes, especially to Baton Rouge hospitals and supply easy connections to events.

“For as long as the I-10 has connected New Orleans and Baton Rouge, many have wondered if passenger rail could as well,” said New Orleans Mayor Mitch Landrieu. “By working with a broad coalition of partners, this feasibility study shows that passenger rail in south Louisiana is possible. Passenger rail will cut travel time, reduce congestion, attract economic development for the entire region, create new jobs and unite two great cities. Smart, reliable transportation is essential to building a stronger Louisiana.”

Capital investment for starting the service would be $262 million, with federal funds underwriting up to 80 percent of the amount. Startup costs are less than the $448 million estimated in a 2010 study for the state of Louisiana. The earlier plan recommended improvements for speeds of up to 110 miles per hour, however, HNTB recommends intercity passenger rail operations with maximum speeds of 79 miles per hour. HNTB also advises leasing trains instead of purchasing them to reduce upfront capital costs.

Existing rail infrastructure owned by Kansas City Southern and Canadian National would be improved to provide for safer movement of cargo and passengers along the 80-mile corridor. Crossings would be upgraded and rail lines doubled in some sections to allow freight and passenger trains to move efficiently on the same lines. Many bridges would be strengthened or replaced so trains could travel at higher speeds. Replacing the 1.8-mile wooden rail bridge across the Bonnet Carre Spillway, where trains now crawl at 10 miles per hour, is the largest capital cost at $62.1 million. HNTB performed the study for the Capital Region Planning Commission, the New Orleans Regional Planning Commission and the Baton Rouge Area Foundation.

The recommended startup service would operate twice daily between the downtowns of Baton Rouge and New Orleans, a trip that would take one hour and 35 minutes with seven stops on the route and produce an estimated ridership of 210,000 in the first year. A morning and afternoon train would start in each of the two cities on similar schedules.

Recommended stations would be at Government Street at South 14th Street near downtown Baton Rouge, at the medical corridor on Essen Lane, at East Cornerview Street near Gonzales City Hall, west of Main Street in LaPlace, adjacent to the Louis Armstrong International Airport in Kenner, at Zephyr Field in Jefferson Parish and the Union Passenger Terminal station near the Superdome, where passengers can access the Loyola Avenue streetcar and other transit options.

HNTB’s recommended startup budget includes $1.5 million for each train station, with the expectation that local communities might spend more on surrounding infrastructure to draw investment for housing and retail in transit-oriented developments.