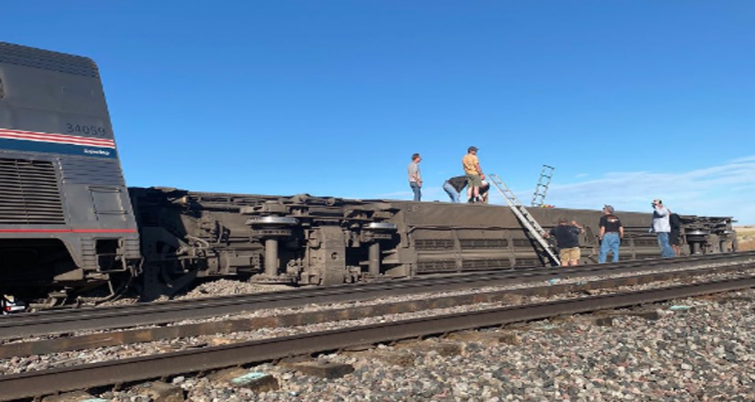 First responders are seen on top of one of the derailed Amtrak cars on Saturday.

A full 24 hours after a derailment of an Amtrak train that killed three passengers near Joplin, Mont., theories were spreading on the cause of the accident.

One possibility is a faulty switch. The derailment occurred close to one, and images show two locomotives and two cars at the front of the train hit a split and continued on the main line track, but the next eight cars fell off the tracks.

A rail defect also is being investigated, although according to BNSF, which owns the line, the most recent inspection was conducted on Sept. 23.

A 14-member team from the NTSB is taking a closer look, and large cranes were transported to the scene along with gravel and new crossties. BNSF is ready with replacement rail as soon as NTSB gives the signal.

Amtrak’s Empire Builder No. 7 was traveling westbound from Chicago en route to Seattle with 141 passengers and 16 crew members on board. Seven people have been hospitalized.

“Our No. 1 focus is safety and we are committed to taking all steps necessary to prevent a similar event from occurring again,” Federal Railroad Administration (FRA) Deputy Administrator Amit Bose said in a statement.

Bose said the FRA has mobilized a team of 18 consisting of technical experts from core safety disciplines including track, motive power and equipment, signal and train control, and operative practices. The FRA has initiated a thorough forensic investigation and analysis in support of the NTSB.

RT&S will have more details if and when they become available.