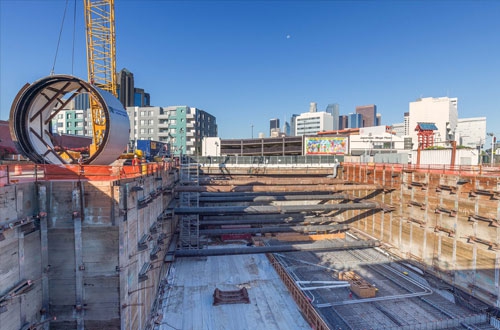 A piece of the tunnel boring machine named Angeli perched above the tunnel pit for the 1st/Central Station in Little Tokyo. When assembled, the TBM will be 450-feet long.
Steve Hymon/LACMTA

The work could also save commuters an estimate of up to 20 minutes by minimizing the need for transfers when traveling to downtown L.A. Construction is expected to wrap up in 2021, officials say.

“This is a major milestone toward the completion of a vital project that truly connects the region by providing a one-seat ride to downtown Los Angeles for users of the Blue, Gold and Expo lines,” said LACMTA Board Chair and Duarte City Council Member John Fasana. “The Regional Connector will reduce travel times for many [LACMTA] riders and make our system more convenient and attractive to those who want a transit alternative to driving.”

The TBM was manufactured by Herrenknecht AG in Germany and weighs approximately 1,000 tons. The machine is 450 feet in length with a diameter of 21.5 feet. Officials say the machine will advance about 60 feet per day after digging has begun.

Fasana awarded TAP Cards at the event to students who won contests to name the TBM and create an illustration for its tail shield. A local 8th grade student submitted the winning name, “Angeli,” and the winning illustration was submitted by a high school senior.

“The Regional Connector is a game changer for the entire region by connecting three light-rail lines that already have more than 170,000 weekday boardings,” said LACMTA CEO Phillip A. Washington. “Measure R played a pivotal role in funding this project and helped us secure a federal grant and loan to build the infrastructure that will be enjoyed by generations to come.”