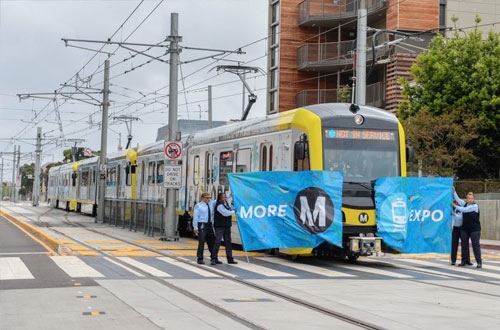 A train breaks through a banner marking the opening of LACMTA’s Expo Line Phase 2.
LACMTA

The project is a 6.6-mile extension of the LACMTA rail system west from the Culver City station to Santa Monica. Phase 1 of the project opened in April 2012 and connected downtown Los Angeles to Culver City along an 8.6-mile route. Phase 2 now connects Santa Monica by rail to downtown L.A., Pasadena, San Fernando Valley, South Bay, Long Beach and dozens of points in between. With seven new stations serving diverse L.A. neighborhoods such as Century City, West Los Angeles and Santa Monica.

“For the first time in a generation, Angelenos and visitors from around the world can travel from our skyline to the shoreline without setting foot in a car — bringing needed relief to some of our most congested corridors,” said L.A. Mayor Eric Garcetti, who is also LACMTA Board Second Vice Chair. “This extension of the Expo Line — along with the recently-opened Gold Line extension and the Crenshaw-LAX Line that is now halfway complete — will improve quality of life by delivering convenient, affordable, and efficient transportation to more people than ever before.”

The Expo Line Phase 2 runs along the old Pacific Electric Exposition right-of-way to 4th St. and Colorado Ave. in downtown Santa Monica. With the opening of Phase 2, LACMTA’s rail system now grows to encompass 87 stations and more than 93 miles of rail.

Major construction began in 2012 and was completed in 2015. The Exposition Construction Authority awarded the design-build contract for Phase 2 to Skanska-Rados, Joint Venture in March 2011 and LACMTA began safety tests along the Phase 2 route in 2015. LACMTA estimated nearly 100,000 people used the Santa Monica station between Friday, May 20 and Saturday, May 21

“Expo is an example of how well a construction project can function,” said Mike Aparacio, executive vice president of Skanska USA Civil on a blog post about the project. “The design-build approach helped make sure that the construction authority, project designers and our construction team were always in lock step – and if we weren’t, the close collaboration made it easy to solve problems. More than anything, it meant delivering a project within the expected budget, a key responsibility on a publicly-funded project. In this case, that funding came from Measure R, where Los Angeles voters elected to tax themselves to fund transit projects. The public has a stake in the success of a project like Expo and it matters to them that public agencies and the designers and contractors they hire can deliver as expected.”

The $1.5-billion extension is the second Measure R-funded rail project to open this year, following the March debut of the Gold Line extension to Azusa.