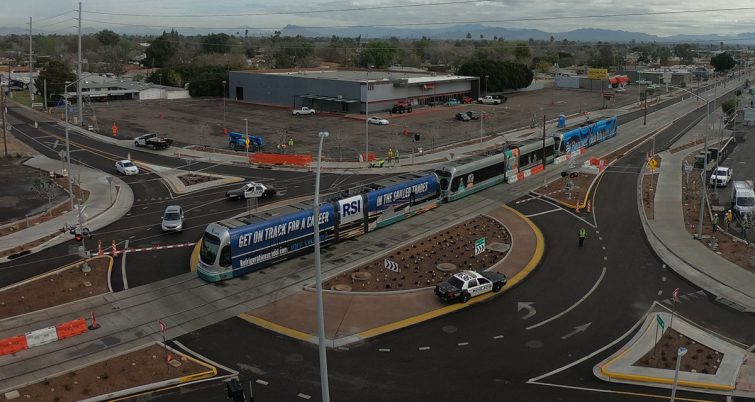 Valley Metro’s light-rail transit line will open a 1.9-mile Gilbert Road extension to the public at a community celebration May 18. | Photo courtesy of WSP USA

The project program management and construction management team at WSP USA, an engineering and professional services consulting firm, will join in the celebration of the project opening.

“Our team is thrilled to have supported this important project and we congratulate Valley Metro and the community on its completion,” said Mark Yalung, WSP’s area manager.

“The team worked very closely with Valley Metro, the City of Mesa and other stakeholders to ensure continuous communication and a timely and successful project delivery,” WSP USA said in a statement.

The new line extends LRT service along Main Street from Mesa Drive to Gilbert Road in downtown Mesa. The project scope entailed the construction of only the second roundabout in the U.S. to be incorporated into a light-rail system.

Upon the project’s completion, the Gilbert Road Extension will further Valley Metro’s mission to connect communities in the Phoenix metropolitan area, enhance bicycle and pedestrian access along Main Street, and integrate with nearby bus routes.

“I personally feel that every day we worked on the Gilbert Road extension we saw positive progress,” said Mike Sotak, office engineer. “The project team worked with Valley Metro as a cohesive group. By negotiating and collaborating early in the project, we were able to reduce construction costs by over $6 million.”

WSP has worked with Valley Metro since the 2008 completion of the original 20-mile, 28-station Central Phoenix/East Valley Light Rail, the longest street-running light-rail starter line in the U.S.

Since then, the consulting firm has collaborated with Valley Metro on projects including work on additional LRT projects, including the Northwest Extension and Central Mesa Extension.

“Through its light rail network, Valley Metro is providing tremendous enhancements to the quality of life for the entire community. We take pride in working with Valley Metro to develop their light rail system,” Yalung added.