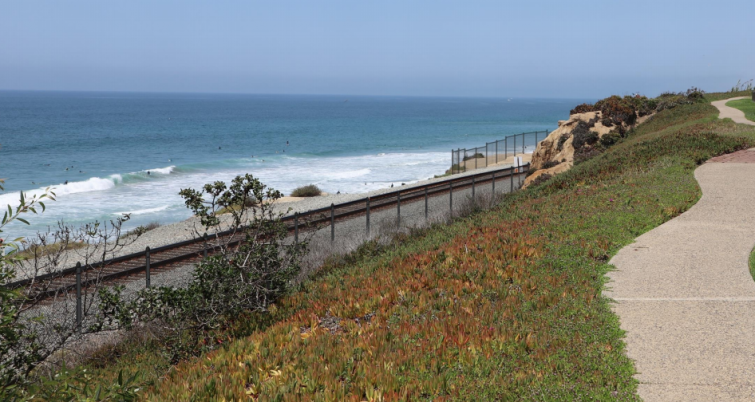 The Del Mar City Council will look at revised plans for fencing along the Del Mar cliffs.

Del Mar residents are proving to be a tough crowd, and the objects in the form of words are still flying.

At center stage is the idea of installing a fence along railroad tracks that sit atop the Del Mar cliffs. The North County Transit District (NCTD) originally wanted to place a chain link fence to protect beachgoers from moving trains. After receiving negative feedback from residents and city officials, NCTD revised the plans and is ready to present them on Oct. 18 at the Del Mar City Council meeting. However, the agency is already facing an uphill battle. The first video shows a simulation of the original plan and the second video shows the revised one.

Del Mar Mayor Terry Gaasterland received a sneak peak at the change to the fences and wrote in an email, “the sketches I saw yesterday would be devastating to our entire region if they move forward. The fencing does not solve the problems they say they want to solve. And it will be terrible to lose this last stretch of accessible coastal bluff in San Diego County with its vistas and trails.”

The fence revisions include a reduction in the overall length of the fence from 12,960 ft to 5,698 ft, lowering some sections from 6 ft tall to 4 ft tall, and replacing some areas with a post-and-cable design instead of the chain link look to help with aesthetics. Parts of the fence also would be moved off the upper bluff and down to track level where it would be out of view of the coastal homes. The 4-ft-high post-and-cable design would be placed on top of the bluff east of the track and would run about a mile from Ninth Street south to Fourth Street.

Gaasterland believes the fence is simply not needed because people know when it is safe to cross railroad tracks.

The NCTD says the fence provides a barrier that currently does not exist while also minimizing the visual impact and maintaining access.