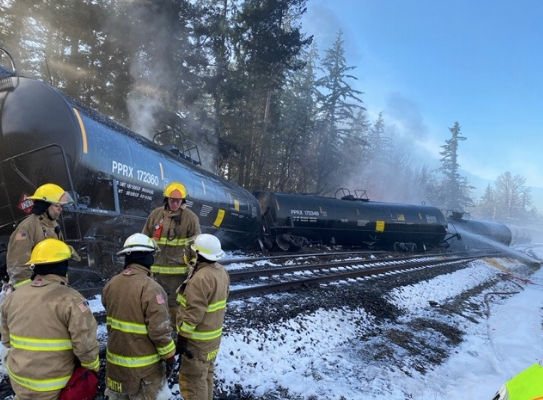 Officials are investigating a train derailment in the state of Washington.
Washington Department of Ecology

Officials are trying to figure out how a BNSF train carrying crude oil derailed in Whatcom County, Wash., on Dec. 22. The accident caused a fire that lasted well into the night.

First responders eventually got the fire under control. About seven railcars left the tracks near Custer, Wash. No injuries were reported and the scene was still being cleaned the morning of Dec. 23.

Everyone within a half-mile radius was asked to evacuate, and the Whatcom County Sheriff’s Office told people to stay away from the accident scene. Interstate 5 was closed between Grandview Road and Birch Bay Lynden Road for about one hour.

BNSF says two workers were on the train when it derailed. The train was traveling to a refinery in Ferndale and was pulling 108 cars.

The Washington Department of Ecology was on the scene to determine if there was any damage to the environment, and a spokesperson said it could take months to return the area to the condition it was in prior to the derailment.

The state of Washington has been experiencing deliberate acts to paralyze trains over the past year. Since January there have been 41 incidents of shunts placed on BNSF tracks in Whatcom and Skagit counties. The FBI’s Joint Terrorism Task Force has been investigating the placement of shunts on the BNSF tracks since Jan. 19.