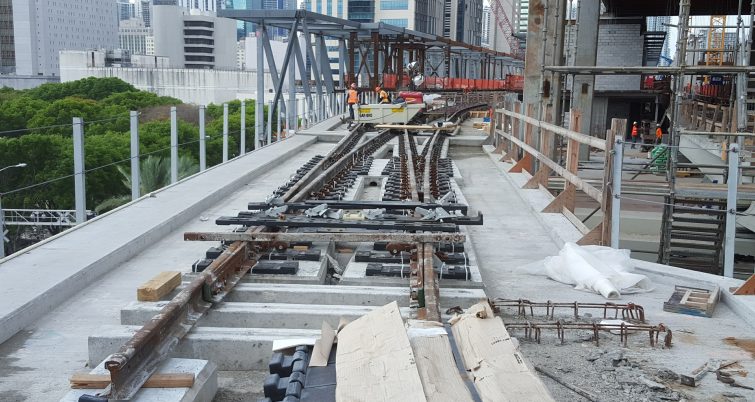 Work with what is there. That usually is the calling following one of two things: an awful haircut or a bad paint job. Workers on Florida’s Brightline project, however, never felt more empowered being the second one in, and so far the private venture, the first of the passenger rail variety in the U.S. in over 100 years, cannot get enough of expansion.

Brightline, which uses track from Florida East Coast Industries, ripped the seal off its first project in December 2018, and currently Phase 2, which links West Palm Beach to the Orlando International Airport, is in full swing while a third project, Orlando to Tampa, is almost ready to see action.

The opener was the West Palm Beach-to-Miami route, and that is where crews benefitted the most from past work. According to Joe Walshe, a project manager with HNTB Corporation working with Brightline, the route between Jacksonville to Miami was double-tracked just 50 years ago, so not a whole lot of the rail had to be touched. 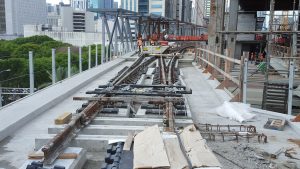 In Phase 1 a total of 14 rail bridges were constructed using thicker top flanges
on the prestressed concrete Florida I-beams.

On average, crews were replacing one out of every three railroad ties on the West Palm Beach-to-Miami line, and the stage also was set at most of the 186 at-grade crossings. Florida East Coast and the Florida Department of Transportation (FDOT) work together to rotate railroad crossing work every five years. FDOT also has a strong design manual in place when dealing with the construction or rehabilitation with crossings, allowing Brightline construction to follow a series of steps that have experienced past success.

Florida East Coast also had detailed records on the type of track that was out there, so older rail and lighter rail could be easily targeted. There have been spots where 115-lb rail was found, and that rail needs to be upgraded to 136 lb.

Saving time and saving money on the project has been going hand in hand for almost two years now. In the city of Cocoa (Phase 2) a turn has to be made on S.R. 528 and I-95, so during the design process bridges were drawn up to get over various highway on and off ramps. Adding complexity is the fact that this stretch of I-95 is one of the most congested and dangerous corridors in the country. The contractor, Archer Western, suggested shifting construction to the south, saving the erection of two structures and in upwards of $20 million. Crews also do not have to deal with the maintenance of traffic and construction staging.

“It required a little more property to buy but as it handles with the schedule and the value engineering, it was a no-brainer,” said Walshe.

In Phase 1 a total of 14 rail bridges were designed to use prestressed concrete Florida I-beams with cast-in-place decks. The team found an alternative in accelerated bridge construction that involved thicker top flanges on the I-beams. The extra thickness was used to form the bridge deck with small 8-in. closures between the beams. The closures were formed with ultra high-performance concrete.

Walshe also thought he was going to have to get his concrete rail ties from either Georgia, somewhere on the West Coast or even as far northeast as Delaware, but with Rocla building a plant in Ft. Pearce, Fla., ties were always close by, and because it was Florida they could be molded all year long.

A steel tie experiment at the West Palm Beach Yard, where there is now a small maintenance facility, also dropped the speed on the cash flow. According to Walshe, steel ties lock in tight and do not require as much ballast.

Dealing with a private owner also eliminates the middleman, resulting in quicker decisions and less frustration. HNTB Corporation and the prime contractor have a direct and open line to leadership.

“I have spent most of my career working for agencies, and those folks once they get going things work out well,” remarked Walshe, “but it is sometimes tough to get a decision made, especially with middle management.

“I am working with the leadership group for Brightline. I find it refreshing that the decision makers are in the room.”

There are two types of Positive Train Control (PTC) in the industry. The first, fixed ACSES, makes use of fixed signaling infrastructure such as coded track circuits

and wireless transponders to communicate with the onboard speed control unit. ITCS, on the other hand, makes use of wireless data radios spread out along the line to transmit information.

Four types of rail track, Class 4, Class 5, Class 6 and Class 7, are being used throughout the Brightline network. Class 5 is for trains traveling at lower speeds, and on those rails PTC has been wired. However, moving north out of West Palm Beach trains can go as fast as 110 mph and wireless radio frequencies must be used. An issue that has cropped up involves curve design. Walshe said there is not a PTC speed for 45 mph, only at 35 mph and 50 mph.

“I could not get a curve to 50 so we had to drop the train speed down to 35,” Walshe said. “There were not enough breaks between the different speeds that they were setting codes at.”

Working on an active freight railroad track also required enough breaks in service to get the work done. On average 14 to 16 trains ranging in size from 9,000 to 12,000 ft long move through a day between Ft. Lauderdale and Miami. Work windows varied week to week, and Walshe said UPS and FedEx trains had to get through without interruption. Sometimes crews were able to work six hours at a time with Phase 1
work, and the window increased significantly during at-grade crossing construction on weekends.

“Dealing with the local community, the FDOT, the local city, the local county and getting police support [for crossing work] … that was a massive undertaking,” Walshe said.

To and from Disneyworld

Phase 2 work started in May and requires new track between Cocoa and Orlando, so crews will not be able to take advantage of already established lines. Ballast is not available in Florida, which contains no granite, so material needs to be shipped in from Georgia. The line will run from West Palm Beach to the Orlando International Airport. A major maintenance facility on airport property is currently being constructed. 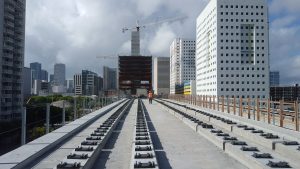 Phase 1 of the Brightline project in Florida takes advantage of previous construction, value engineering and an accelerated schedule.

Conceptual designs are being worked on for Phase 3, which will connect Tampa and Orlando along the I-4 corridor.

“People are really jazzed about the idea of coming down I-4,” said Walshe.

In total, Phase 2 will include the laying of 490,000 ties and transporting 2.35 million tons of granite and limestone by 20,000 railcars. Additionally, approximately 2 million spikes and bolts will be hammered and put in place over the next 36 months.