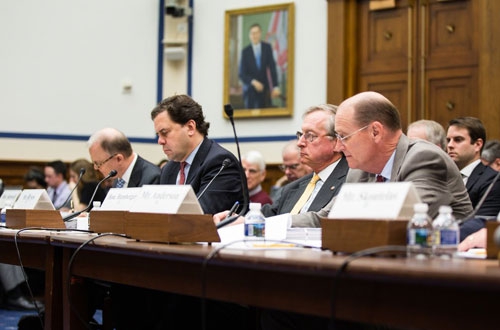 The U.S. House Transportation and Infrastructure Committee held a hearing on Feb. 15 examining the implementation of Positive Train Control (PTC).

Rep. Bill Shuster (R-PA), chairman of the committee, said, “Throughout the implementation process, railroads have faced a complex set of challenges. One of the biggest issues was the ability to obtain spectrum. Both FRA and [the Government Accountability Office] have published multiple reports articulating the other obstacles faced, such as the integration and field testing of PTC components, the development of PTC technology, issues with availability of suppliers of PTC technology, radio interference, and interoperability issues. Today we are here to see if these issues, among others, still linger for the railroads.”

Rep. Jeff Denham (R-CA), chairman of the Subcommittee on Railroads, Pipelines and Hazardous Materials, said, “From its inception a decade ago, Congress and stakeholders anticipated that the PTC mandate would be a daunting undertaking. PTC had never been implemented on such a large scale, and has never required such a high level of interoperability… we want to hear about any implementation challenges for the industry, and how we can work together to ensure PTC deadlines are met.

Reyes said railroads had communicated a number of challenges to FRA regarding PTC implementation including a limited number of PTC system vendors and suppliers, lengthy time to negotiate contracts with those vendors and suppliers, hardware and software technical reliability issues, delays in testing interoperability and lack of progress by tenant railroads on equipping locomotives with PTC.

Andersen testified that Amtrak would have PTC installed on all tracks and equipment it owns by December 2018. Amtrak is facing non-compliance issues on two fronts. Anderson said it is doubtful that Amtrak will operate trains along routes where delays in PTC implementation occur with host railroads. The other side of the issue is that Amtrak will not permit non-compliant equipment on its railroad after the deadline, which could present problems along the Northeast Corridor. Andersen said Amtrak is working with the FRA and those railroads that may be affected to determine a path forward.

The T&I Committee provided a link to a Summary of Subject Matter, available here.

The hearing in its entirety is available to view here.