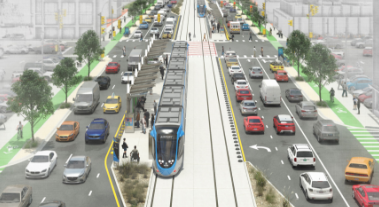 When there is no way to come up, you need to keep going.

For the new transit line that will be constructed in Austin, Texas, the longer way is going to cost millions of extra dollars. Transit planners are assuring the public everything will fit in the budget that has been created by a tax increase of 8.75 cents per $100 of property value. Voters approved the tax measure last November.

For the tunnel construction, the problem starts at Lady Bird Lake. The tunnel under the lake needs to hit bedrock, which makes it virtually impossible to come up just south of the lake due to the depth.

The next point to surface is not an option, either, due to a number of major intersections and a 100-year floodplain at Riverside Drive. Further south there is a second flood plain and an area where South Congress Avenue starts to slope upward.

Officials believe the best opportunity to pull the tracks up from the underground is at South Congress Avenue near Academy Drive, making the tunnel more than a mile longer than expected.

A longer tunnel could help sidewalks and roads be reconfigured, but a shorter tunnel would cost less.

The public will have the chance to provide input in the coming weeks, and cost estimates are expected to be firmer in September.