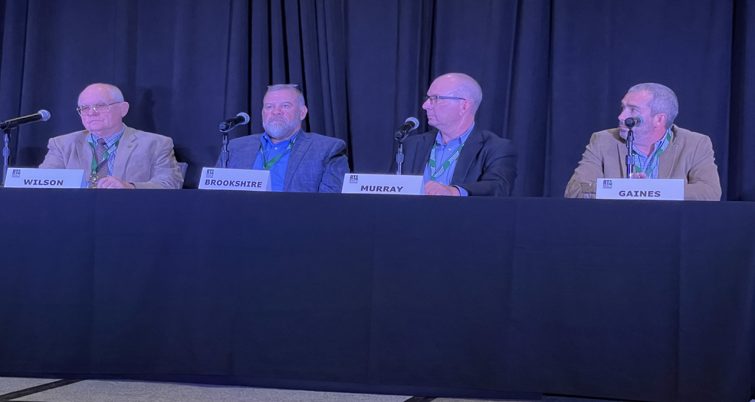 A shrinking workforce and legislation that is being pushed through Washington is weighing heavily on the minds of saw millers.

A few in the industry made up the Today’s Sawmill Challenges at the Railway Tie Association’s annual meeting in St. Louis last week.

With the housing market boom and COVID-19 pandemic, railroad wood crossties have taken a back seat to other products in the nation’s sawmills. Supply chain issues are constant, and with the older workers opting out the problem does not seem to have a solution in the near future.

“There are not enough people on the ground in the lumber industry,” Frank Wilson of Wilson Brothers Lumber said.

Paul Gaines from Madison County Wood Products echoed Wilson’s concern, and said wages in the sawmill industry are up 20%.

Production is starting to pick up and it is improving, and what saw millers need to do at the plant is use technology like automation to attract younger workers so the increase in production can be handled.

Perhaps the greatest success (but failure) recruitment story comes from the Missouri Forest Products Association, which attempted to create a school for loggers in Missouri. After being turned down by just about every technical school because enrollment numbers could not be guaranteed, the association created its own education platform. A 10-week program was put together, but after a year and a half it failed.

“We just could not recruit,” said Brian Brookshire. “I think we need to give it another shot where it’s more inclusive and it needs to be set in a technical school for recruitment. The entire industry needs to come together to make this happen.”

President Biden’s Build Back Better economic package also is looming over the sawmill industry. According to Wilson, the legislation could cripple coal-fired plants as the administration tries to encourage the use of more green energy like wind and solar.

“Solar and wind are unreliable and will cause brownouts in the future,” remarked Wilson.

Private industries also are buying up forests and using them to offset carbon footprints, making them off limits to loggers. Build Back Better has money that would assist land owners to participate in more of these programs. Darwin Murray from McClain Forest Products said there is no better way to store carbon than in a railroad tie. Dana Cole, who moderated the session, from the Hardwood Federation, added once a tree is mature it does not store as much carbon.

Congress has been unable to pass Build Back Better, but President Biden said the focus is now on that piece of legislation now that the $1.2 trillion infrastructure bill has been passed.