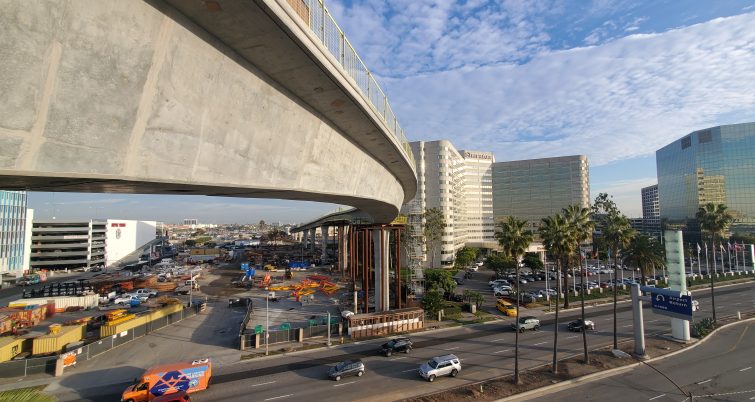 Crews completed the last pour of the superstructure over Century Boulevard before the holidays.

“The automated people mover system is coming to life before our eyes, and the sight of the nearly completed guideway helps Angelenos and our guests visualize just how this system will help transform LAX,” said Justin Erbacci, Chief Executive Officer, Los Angeles World Airports. “Over the course of four months, the guideway section over Century was safely constructed above one of busiest streets in the city with minimal disruptions to traffic below. We congratulate our project team for reaching this milestone and eagerly anticipate completing the full guideway superstructure next year.”

Construction crews completed the last pour before the holidays above Century Boulevard, marking the end of a four-month process to connect the north and south ends of the guideway. This milestone was achieved using an innovative cast-in-place segmental construction technique.

This method used a cast-in-place technique and a traveling form system, which served as the platform upon which concrete was placed in formwork. This process is distinct from similar segmental construction methods that use precast segments that are lifted into place. This span of guideway over Century Boulevard required the construction of 13 segments, each approximately 15 ft in length.

In addition to the guideway segment spanning Century Boulevard, cast-in-place segmental construction is being used to construct the remaining sections of guideway at two additional locations. In November, work began on a 250-ft-long section of spanning Parking Structure 2B inside the Central Terminal Area (CTA). Additionally, work will begin on the segment spanning east to west over Sepulveda Boulevard in the new year.

“Building the APM has required that we employ innovative and creative solutions to a number of logistical challenges, making it a truly exciting project to work on,” said Laura Ware, spokesperson for Linxs Constructors. “Using cast-in-place segmental construction is a perfect example; while it is an uncommon technique, it was determined to be the best solution when traffic conditions and space constraints on material staging were considered.”

The centerpiece of LAX’s Landside Access Modernization Program (LAMP), the APM is a 2.25-mile electric train system that will transport travelers into and out of the CTA, connecting them to new off-site parking facilities, regional light-rail transportation and the Consolidated Rent-A-Car (ConRAC) facility. The APM project is a critical investment into the infrastructure of Los Angeles as the city prepares to host the 2028 Olympic and Paralympic Games.

The APM will feature six stations: three stations inside the CTA that will connect to the terminals via elevated pedestrian walkways and three stations outside the CTA that will connect to LAX’s new economy parking, regional light-rail transportation, and the ConRAC facility. The APM is expected to relieve congestion within the CTA and in turn the surrounding thoroughfares, thereby reducing emissions and vehicle miles traveled.