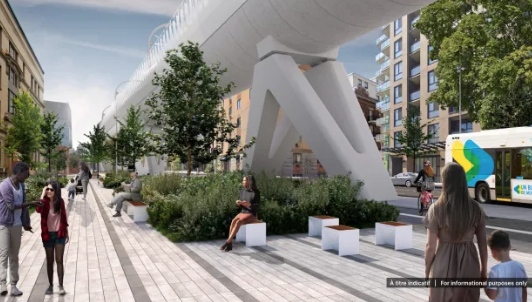 Prime contractor CDPQ Infra believes most concerns about the light-rail design have been addressed.

Despite new designs released for the second phase of the $10 billion REM de L’Est light-rail project in Montreal, a new delay could mean a late start in terms of construction.

The city is still calling the proposed route, which will have 23 stations on 32 km of track, an eyesore and believes it will be inefficient and will threaten at least two neighborhoods. Due to the continued concerns, Quebec’s environmental review agency will delay public hearings. The move means work will not begin in mid-2023.

Last week, prime contractor CDPQ Infra unveiled new designs for the project that it believed addressed more than 80% of the concerns raised in a report authored by an expert advisory committee. The advisory committee report was critical of the project’s original design, stating that the large concrete pillars to support the elevated track could end up dividing neighborhoods. The report said the elevated track needed to be fundamentally revised, and expressed concern about the large gap that would be created where trains would exit the tunnel onto the elevated track.

The changes include a 16-km pedestrian promenade, bike paths and green space. An urban lookout overlooking the route’s tunnel entrance on Rene-Levesque also would be constructed, and the wire system would take on the form of a series of arches above the track. The revisions, however, are not included in the final price tag.