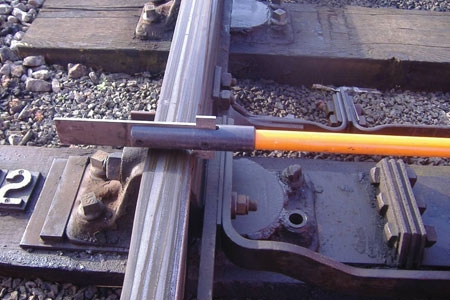 Inspection of railway systems in general, and of track and key track components in particular, has been the subject of new and innovative technology designed to more accurately monitor the condition of the track structure and its key components and provide timely and accurate information to the responsible maintenance-of-way officers. These new technologies represent significant research and implementation activities by government agencies, suppliers and the railroads themselves.

However, one area that has been lagging in the implementation of new inspection technology has been the area of turnouts and the key turnout components, such as switches, frogs and the switch mechanism. While other areas of the track structure use a combination of visual and automated inspection, as reflected by Federal Railroad Administration (FRA) and railroad track standards, turnouts still rely very heavily on visual walking inspections. This, likewise, is reflected in the turnout standards, which include key provisions that are qualitative rather than quantitative, such as FRA 213.135 (h), which addresses chipped or worn switch points and states, “unusually chipped or worn switch points shall be repaired or replaced.”1
Since turnouts are a design “discontinuity” in the railroad track structure, representing a change not only in track geometry, but also in the stiffness of the track structure, high levels of force are generated as a vehicle negotiates the turnout. These high force levels result in rapid degradation of the turnout and its key components and in the worst case, derailments. Derailments in turnouts are a major derailment category representing more than 20 percent of the track caused derailments. Analysis of derailment cause severity by the University of Illinois2 ranked derailment causing turnout component defects as follows.

This opportunity area of improved inspection of turnouts is currently being addressed at several levels by different research programs and studies.

At a fundamental level designed to support and improve current turnout inspection practice, a National Academy of Sciences IDEA Program1 sponsored project is looking at improved inspection tools that can be used to reduce wheel climb derailments at switch points. This project is looking at international inspection practices aimed at reducing the risk of wheel climb at switch points and the potential application of these practices for U.S. freight and passenger railways.

An example of such an improved inspection practice for track inspectors is shown in Figures 1 and 2, which show gauges used to measure switch point chipping and/or wear. Figure 1a and 1b show a gauge used in the U.K. on Network Rail and Figure 2 is a related gauge used in Switzerland by the Swiss Federal Railways (SBB).

Other manual gauges are used to look at wheel contact through the switch point, frog damage, etc.

However, since the movement in track inspection is towards automated inspection technolgies that complement the track inspector, several research programs are looking at using existing or emerging technologies to look at the turnout areas to include the different turnout parameters listed in Table 1.

One such research activity, funded by supplier Harsco Rail with support from Network Rail (U.K.) and the FRA’s BAA research program, led to the development of a new generation Automated Switch Inspection Vehicle (ASIV) for automated inspection of the rail portions of turnouts to include switch point, frog, stock rail and closure rails on both the open and closed sides of the switch.5, 6 The inspection vehicle uses a new generation high-speed rail profile measurement system to measure the switch and frog profiles and then analyzes these profiles using newly developed state-of-the-art switch analysis software. The system inspects and analyzes the rail portions of all of the major component areas of the turnout to include the switch points, frog, stock rails (straight and curved) and closure rails (straight and curved). Thus, key areas of the turnout are inspected to include such key safety parameters as the gap width between switch point and stock rail, vertical and side wear on the stock rail, relative height of the switch point and stock rail, gauge face angle and corner radius of the switch point, relative height and angle of the frog nose and wing rails, etc.

The high-sampling-rate profile acquisition system used in the ASIV collects sufficient rail profile data to develop three-dimensional (3-D) composite images of the turnout and its key components. These 3-D images, which are composite images made up of one-inch cross-sectional slices of the switch and frog sections, are then used to measure the key maintenance and safety parameters, compare these measured values to defined standards and identify defects as either red defects that exceed safety standards or yellow defects that exceed maintenance standards. This is illustrated in Figure 3a, 3b and 3c, which show several significant (red) defects identified by this automated system.

Another ongoing research program geared towards automated inspection of turnouts is based on machine vision and association image recognition software. Machine vision systems are currently in use or under development for a variety of railroad inspection tasks. The University of Illinois at Urbana-Champaign (UIUC) is working on machine-vision research projects for turnout inspection (as well as inspection of other railway components) under the sponsorship of the various railroads, industry associations and government agencies.2 Such a machine vision system consists of a video acquisition system for recording digital images of track and customized algorithms to identify defects within the images. It is this image recognition software that separates the machine vision inspection systems from the simpler video recording systems, which require playback and manual (off-site) review of the recordings.

In the UIUC approach, turnouts are identified in track using algorithms to look for periodic components indicative of turnouts, such as frog bolts. Once the turnout area has been identified then inspection of components within the turnout takes place. Components currently being studied include switch rods, switch rod bolts, ties and switch points with a focus on identifying chipping of the switch point as shown in Figure 4.7

Yet another approach to switch inspection (and monitoring) is one that is being addressed in Europe via in-track switch monitoring systems.8 This approach is somewhat different than the automated inspection technology discussed above, in that it uses instrumentation within the turnout to monitor key performance and safety parameters on an ongoing basis. These measurements include:

While many of these technologies are still in the research, development or early implementation stages, they represent significant potential for complementing today’s visual and manual inspection process with automated technologies that provide accurate and complete information about the condition of the turnout.