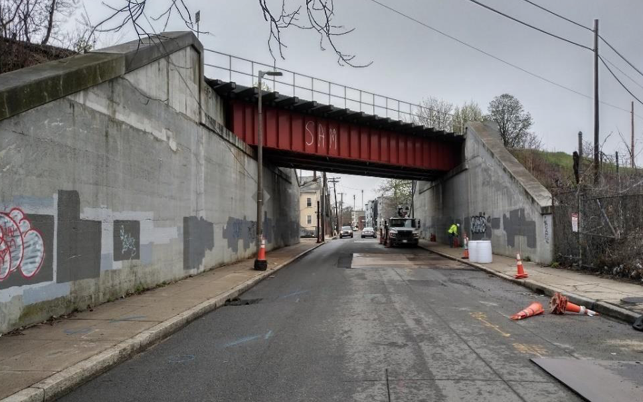 The Norfolk Avenue Bridge is one of two bridges that are being replaced.

The MBTA announced local artists have begun painting murals beneath the East Cottage Street and Norfolk Avenue bridges as part of a public artwork installation.

The MBTA is replacing both bridges, built in 1906, between Uphams Corner and Newmarket Commuter Rail stations. The East Cottage Street and Norfolk Avenue bridges carry the Fairmount Commuter Rail Line through Roxbury and Dorchester.

The mural installations are facilitated by Dudley Street Neighborhood Initiative (DSNI), a nonprofit, community-run organization based in Roxbury. DSNI’s mission is to empower Dudley residents to organize, plan for, create, and control a vibrant, diverse, and high-quality neighborhood in collaboration with community partners.Established in 1984, DSNI has managed or been involved in a variety of public art projects that have uplifted and beautified the neighborhood for more than 35 years.

The local artists selected by DSNI to install the murals are Luis Taforo, Geo Ortega, Eyevan, Ricardo Gomez, and Michael Talbot, who were all chosen for their commitment to improving public spaces through both the arts and activism. The murals will be completed ahead of the bridge installations, which are anticipated in mid-November 2022.

Ortega and Taforo will paint a mural entitled, “Birds of a Feather,” which has been described as a visual representation of the Dorchester and Roxbury communities with paintings of the Cape Verdean King Fisher, Papagayo de la Española, Puerto Rican Toby, Rock Pigeon, and Sunbird as examples of these respective homelands’ natural beauty as well as the adaptability of their people.

Eyevan is creating a piece centered around the multidimensional beauty that sunflowers display. The flower absorbs radioactive isotopes from the soil and creates fertile environments for other life to thrive. Despite adversity, their growth is never stunted, and the natural process creates a healthy ecosystem full of life around them. Eyevan believes that people embody that same power – the power to stand tall in the face of adversity and grow through it. The piece also serves as an ode to Graffiti Letters and features quotes from activists that have dedicated their lives to the struggle for human rights.

Gomez will paint a mural emblazoned with word, “Roxbury,” which intends to inspire positivity, uplift the community, and present a sense of joy to the overall public.

Talbot will paint a mural with the theme of “strength in the pack,” which will focus on the strength, pride, determination, courage, and diversity of the local community through the imagery of animals in packs and flora.