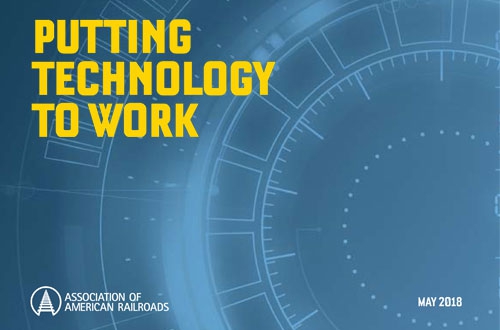 Ahead of an event held on Capitol Hill to demonstrate the rail industry's innovations, the Association of American Railroads (AAR) released a white paper highlighting technology's role in making the U.S. rail network safer, more efficient and more reliable.

“America is home to the greatest freight rail network in the world, and we are putting technology to work to keep it that way,” said AAR President and CEO Edward R. Hamberger. “Next-generation innovations like drones, lasers and automated technologies are revolutionizing how we run a railroad.”

AAR says that the U.S. Department of Transportation projects a 41 percent increase in freight shipments by 2040. The association explains that the freight rail industry has made consistent, substantial private investments in infrastructure, equipment and technology, totaling roughly $100 billion in the last four years alone, to meet those future demands.

The white paper outlines how railroads have used technology to monitor the more than 1.6 million rail cars and about 40,000 locomotives operating across the 140,000-mile rail network. The paper also points out the trackside detectors railroads have deployed to harness a host of technologies – such as infrared and lasers – to identify microscopic flaws in equipment as trains pass by at full speed. Real-time assessment of infrastructure and equipment has allowed railroads to schedule and conduct proactive maintenance, which enhances safety as well as network fluidity and productivity, notes AAR.

The industry’s environmental stewardship is also recognized in the paper. AAR notes that in 2017, railroads on average moved a single ton of freight an average of 479 miles per gallon of fuel, while in-cab fuel management systems have improved fuel efficiency by up to 14 percent and Tier 4 locomotives have reduced emissions from diesel locomotives by as much as 90 percent.

“This 200-year-old industry is poised to meet the challenges of tomorrow,” added Hamberger. “Building on the technology of today, such as Positive Train Control and Big Data analytics, the industry will continue to do what it has always done for the American economy – deliver.”

AAR’s inaugural RailxTech event on May 15, provided lawmakers a firsthand glimpse at the future of railroading with hands-on demonstrations by the experts driving rail innovation.