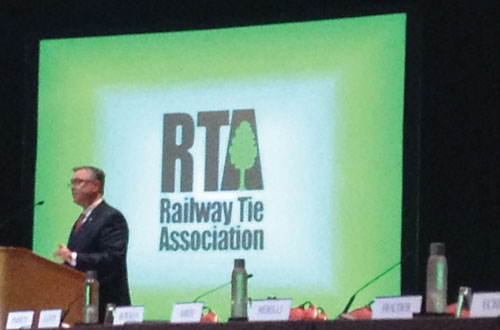 The 96th Annual Railway Tie Association Symposium and Technical Conference was held October 14 – 17 in Orlando, Fla., where 307 attendees gathered together to discuss the crosstie industry, as well as the railroading environment as a whole.

Federal Railroad Administrator Joseph Szabo took the stage as the keynote speaker during Thursday’s luncheon. He addressed the crosstie suppliers, railroaders and railroad executives with words about the exponential growth of the railroad industry, in both freight and passenger rail. Szabo, who was invited to last year’s conference, was unable to attend due to the government shutdown that lasted from October 1 – 16, expressed his apologies for not being able to attend the year prior and was eager to share his words with the crowd.

“World-class economies require a world class, and constantly improving, transportation system,” Szabo said. “The key word here is system. It’s not good enough to build the best roads, the best airports or the best railroads. The future of American transportation is multimodal. And so we must develop the means to plan for, fun and build this multimodal vision – a vision that allows goods and people to move seamlessly through the network utilizing the mode or combination of modes that are most efficient for the journey.”

Szabo noted that in the next few decades the transportation network will need to move 100 million additional people and four billion more tons of freight. Amtrak’s ridership has grown 40 percent in the past decade, setting ridership records in 10 of the past 11 years.

For this increase, he points to freight rail, saying that it can be the most cost-effective, least oil-reliant and most environmentally friendly mode to move people and freight.

Szabo spoke passionately about the GROW AMERICA Act, which would provide FRA with $19 billion over the next four years to invest in rail safety and development projects, saying it would not only increase rail funding but would transform how the government spends transportation dollars.

“As we plan for this multimodal transportation system – as proposed in the GROW AMERICA Act – rail will play a larger role to move people and goods safely, reliably and efficiently,” he explained. “So every new crosstie we lay will do more than strengthen a railroad – it will improve our ability to continue leading a global economy.”

Randy Bowmen, American Railway Engineering and Maintenance-of-way Association (AREMA) president, also spoke Thursday, informing listeners of what is going on at the association, which now has more than 6,800 members. His focus was education and was happy to report that AREMA’s Student Chapters have seen much growth in the past two years and now has 17 student chapters. He also shared that in 2014, $63,500 was awarded in scholarships through the AREMA Educational Foundation.
Other highlights of the event included the annual golf tournament, the President’s Reception, as well as many presentations around economics, wood supply and procurement, a research forum and a legislative update by Ed Hamberger, president and chief executive officer of the Association of American Railroads, among others.

The 97th RTA Symposium & Technical Conference will be held November 3-5, 2015, at the Marriot Starr Pass Resort and Spa in in Tucson, Ariz.

The AREMA 2014 Annual Conference & Exposition was held September 28-October 1 at the Hilton Chicago in Chicago, Ill., where conference goers attended educational seminars, AREMA Committee meetings and presentations, as well as networked with colleagues, suppliers and customers in the exposition hall.

During the opening General Session, The Dr. William W. Hay Award for Excellence was presented to Union Pacific for its Santa Teresa Terminal project in New Mexico and the AREMA Educational Foundation awarded 37 scholarships; there were 78 applicants this year. Also on this day, FRA Administrator Szabo gave the keynote address, where he said there is a need for more transportation capacity and mentioned the long list of benefits of moving goods via train versus truck. He spoke of the GROW AMERICA Act and what it would mean for the industry and emphasized the importance of safety said “we owe it to the public to do better.”

The closing General Session included a Railway Industry Update by Anthony Hatch, Transportation Industry Analyst, ABH Consulting; an update on the Chicago Region Environmental and Transportation Efficiency program and the installation of the 2014-2015 AREMA officers.

The 2015 AREMA Conference & Exposition will be held in conjunction with Railway Interchange 2015, October 4-7, 2015 at the Minneapolis Convention Center in Minneapolis, Minn. The conference will then be held in Orlando, Fla., August 28-31, 2016.