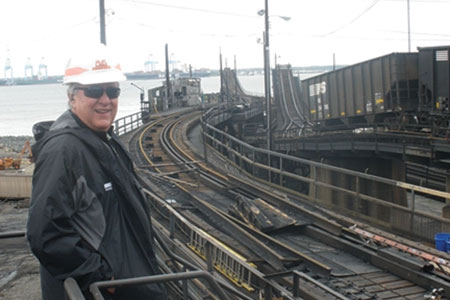 AREMA President Jim Carter looks back at his 2012-2013 term at the helm of the association.

AREMA President Jim Carter looks back at his 2012-2013 term at the helm of the association.

Jim Carter set out clear concise goals last year when he took over as AREMA president, including a focus on education and getting young railroaders involved. Here, Carter discusses his goals and his vision for the future of AREMA.

RT&S: How did your day job at Norfolk Southern prepare you for your role as AREMA President?

Carter: I was asked after Hurricane Katrina in 2005 what experiences prepared me to respond to what we had in the wake of that storm. Among other things, needing to pull 4.5 miles of track from the bottom of Lake Ponchartrain. I responded that though none of us had dealt with a storm of that magnitude, we had dealt with all sorts of weather issues, including lesser hurricanes and we just did what we had done in the past on a larger scale. Everything that we do in life serves to prepare us for what we do in the future. I have been fortunate to work with some great folks and great leaders through my career at Norfolk Southern and have both learned a great deal from them and borrowed from many of their examples. Having worked for Southern Railway, Norfolk and Western and Norfolk Southern for more than 40 years, I am certainly a product of that culture and I believe it has prepared me well to deal with most any situation and any type person.

RT&S: What are your thoughts on the past year as president of AREMA?

Carter: Like the rail industry in general, AREMA is at a fascinating time in its history with a unique set of problems and tremendous opportunity lying before it. The advanced registration for Railway Interchange 2013 is strong and speaks to the interest in our organization, REMSA, RSI and RSSI. Seeing firsthand the strong relationship between our organizations has been fulfilling. Our membership continues to grow and it seems to me that committee activity and membership levels are unprecedented. The influx of young engineers into the profession and AREMA precipitated by the aging workforce – see my picture – is exciting. The explosion in student chapter growth is certainly unprecedented and, to me, is probably the biggest story of the past year. I have had the opportunity to speak to several AREMA student chapters and have witnessed the quality of the students and faculty advisors and their interest in our profession. My hat is off to all of the great AREMA staff and all of the Committee 24 members who continue to foster these chapters – thanks for all of your hard work.

RT&S: Have you reached all the goals you set? Was there anything you wanted to do that you did not get around to or could not do?

Carter: If you ever reach all of your goals, you are probably setting them too low. I said when I took office that getting young people more involved would be my primary goal and it seems that AREMA, like the industry in general, is doing very well in that at this time. Another one of my goals was to get more spouses involved in the spousal program at the conference this year. Time will tell if I reached that goal.

When I took office, I intended to visit all of the student chapters. They grew so quickly that I was not able to do that, though I still plan to visit some this fall. I certainly enjoyed my visits to all of those that I did make it to. Thanks to all of you for your hospitality.

RT&S: What did you accomplish during your term in office? What are you most proud of having accomplished?

Carter: I hope that I have encouraged more young people to get actively involved in the organization. To me, that is critical for the future viability of AREMA. I also hope that I have helped strengthen the bonds that tie us to organizations like REMSA, NRC, RSI, RSSI and RTA. They are important to AREMA and the rail industry in general.
I would like to thank Railway Track & Structures for giving me a monthly forum to reach all of the membership. Many people have commented to me about my monthly columns throughout the past year and that has encouraged me to try harder to touch more people.

A personal AREMA accomplishment for me as a bridge guy is the reestablishment of Team 43, the Bridge Maintenance Steering Team. I would like to thank Steve Lloyd for taking on the role of committee chairman and the leadership of Committee 10 for their understanding that an additional forum for the involvement of young bridge maintenance professionals was needed.

I hope that I have loosened the organization up a little and made it friendlier.

Carter: AREMA is strong and I see it continuing to become stronger as time goes forward. I see the organization getting younger during the next five to 10 years and becoming more diverse. I have told young engineers in our bridge group at Norfolk Southern that they need to hit the ground running to take leadership roles early. The same is true of AREMA – we need young railroad employees to get involved in committee leadership roles so they may become the leaders of the organization soon.

Carter: AREMA will be whatever the members want it to be. It has great opportunity to grow along with the rail industry. To succeed, it will need the continuing involvement of railway engineering professionals from both the railroad and consulting communities. It will also need the continuing support of the Class 1 railroads, shortlines and the supply community.
We work in an industry that is based on technology that is 175 years old – the steel wheel on a steel rail. That technology has not been improved on for moving freight. We must use cutting-edge technology to enhance that basic technology and AREMA must stay involved in integrating that technology into the industry in the right ways.

To succeed in this and in all of its future endeavors, AREMA needs to continue to attract good, quality members who want to be involved and make the organization better.