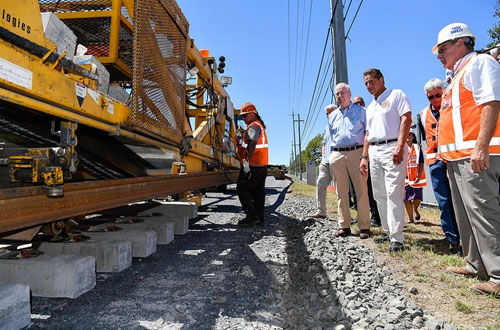 The MTA cites its use of a New Track Construction (NTC) Machine as a key factor in the timeliness of the project.

The machine lays track more than 10 times faster than the MTA has ever previously been able to do manually, which officials say will save $2.4 million in construction costs. At the faster speed, MTA officials say the machine is capable of laying one mile of track per day.

MTA officials say work has begun on the final phase of the project between Farmingdale and Central Islip and is expected to wrap up in 2018.

Extending from Farmingdale to Ronkonkoma, the double track is expected to significantly shorten delays along the LIRR. With $387.2 million in state funding, the project is set to be complete in the second phase through design-build contracting.

The track is also set to allow for more off-peak service in both directions by adding 13 miles of parallel track. The project is expected to boost frequency of rides available to one train every 30 minutes in both directions, a possible improvement from the previous standard of one train every hour. Lowered delays due to service disruptions are also predicted with the added track.

Gov. Cuomo toured the double track site with MTA Chairman and CEO Thomas F. Prendergast, as the NTC machine was laying the final portion of the 3.5-mile Phase 1 track.

“The governor has challenged us to move more quickly and efficiently in all we do and to use new, innovative ideas to advance projects,” Prendergast said. “With the use of this new track-laying technology, MTA will save $2.4 million in the first phase of double track alone and bring us a big step forward in reducing delays and providing better service on the Ronkonkoma Branch in both directions.”

“New York State is moving aggressively to bring our mass transit systems into the 21st century—not just to meet the needs of our current population, but to foster smart, sensible and sustainable growth,” Gov. Cuomo said. “Adding a second track to the Ronkonkoma Branch is a project has been talked about for decades, but was never set into motion. By pairing innovative equipment with our strategy of design-build construction, we are accelerating the pace of these critical infrastructure projects to improve Long Island commutes and strengthen the region’s economy.”