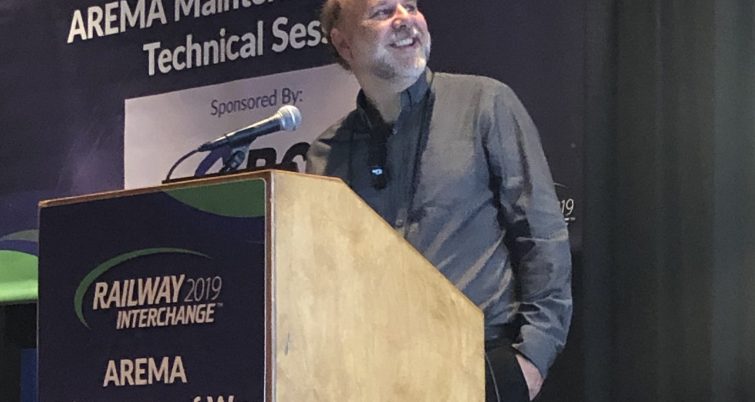 The education energy was flowing during the second day of the AREMA 2019 conference at Railway Interchange in Minneapolis.

The one session that presented to a packed house was on the accelerated construction of a Union Pacific railroad bridge in Wilmington, Ill. The job involved the repair and replacement of three aging structures that crossed the Kankakee River as well as upgrading three at-grade crossings. Crews had to construct a temporary work bridge at one of the sites, and to pass strict environmental constraints  the contractor used biodegradable hydraulic fluid in the machines needed for construction. A thick layer of stone was placed along the shore and a turbidity curtain also was used. Accelerated construction bridge methods allowed the temporary span to be built in 90 days. The project was funded by a $1.6 million grant that was designated for high-speed rail.

In a presentation titled “UAVs: Beyond Pretty Pictures: A Case Study in Analyzing the Integrity of UAV-Derived Data for Full-Scale Railroad Infrastructure Design,” Matt Williams and Michael Allen from Norfolk Southern talked about the use of a Phantom 4 Pro on a 5-mile-long test project that involved 23 culvert replacements and an environmental permitting problem. After a rough start the group re-evaluated their approach and made some improvements, including using Google maps to set pin drops for navigation. During a second attempt, the top-of-rail distance was a tenth of an inch and they were able to get within 25 ft of the rail. The challenges were with earth cuts and highly wooded areas. The UAV, however, was very helpful when it came to designing and completing a bridge replacement on the project site.

With connected vehicles beginning to take over the landscape research is now being done to create a way where vehicles can communicate with at-grade crossings. In a session titled “Prototype Rail Crossing Violation Warning Phase II—Advancing the Use of Connected Vehicle Technologies to Reduce Crashes at Grade Crossings,” Jeff Utterback, senior research scientist at Battelle Memorial Institute, talked about research involving collecting real-time data from connected vehicles. Researchers are using vehicle-to-infrastructure communication to alert the driver and stop the vehicle short of the grade crossing if necessary. Work on Phase 2 is currently underway.

Look for some of these presentations to appear in future issues of RT&S magazine.