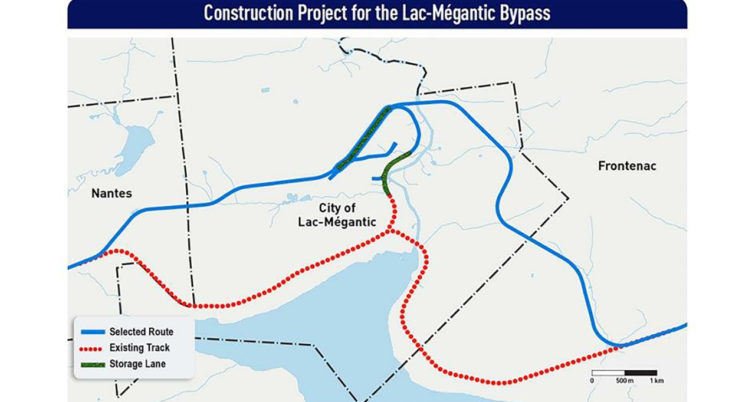 More than nine years after the horrific derailment of a crude oil unit train at Lac-Mégantic, Quebec that claimed 47 lives and led to new regulations for railroad hazmat tank cars, the Government of Canada announced that an agreement-in-principle has been reached with the City of Lac-Mégantic for land parcel acquisition required for construction of the 12.5-km (7.75-mile) Lac-Mégantic bypass.

“This agreement in principle will allow both parties to prepare the deed of sale,” said Transport Canada, adding that it “is fully committed to the bypass project and the entire route that has been identified to permanently get trains out of downtown This is an important project for the community, the Government of Canada, and the families of the 47 victims of the tragedy. The Government of Canada is working with the Government of Quebec, the City of Lac-Mégantic and the municipalities of Frontenac and Nantes to complete this project, which will benefit the community.”

Land parcel acquisitions for the bypass, which will be built, owned and operated by Canadian Pacific, are expected to be finalized over the next few months. The railroad line is the former Central Maine & Quebec, which CP purchased from Fortress Transportation and Infrastructure Investors LLC (FTII) in late 2019. Fortress subsidiary Railroad Acquisition Holdings had acquired the assets of the bankrupt Montreal, Maine & Atlantic from Rail World following the Lac-Mégantic disaster, reorganizing it into the CM&Q (Railway Age’s 2016 Regional Railroad of the Year).

The line’s history dates to the Bangor & Aroostook. On the CP, Lac-Mégantic is the where the Sherbrooke and Moosehead Subdivisions meet.

In 2015, the City of Lac-Mégantic contracted AECOM to conduct a rail bypass project pre-planning feasibility study, which the Governments of Canada and Quebec funded. A monitoring committee with representatives from the federal and provincial governments and the three municipalities was formed. The feasibility study was carried out in three phases. The first, completed in 2016, identified and analyzed three potential corridors. The monitoring committee selected Corridor 1.

During the second phase of pre-planning, three variations on Corridor 1 were developed and assessed. In 2017, the monitoring committee selected variation number 2 was selected by. The final route selected was communicated in the project funding announcement by the federal and Quebec governments in May 2018.

The project involves construction of two yard tracks in the Lac-Mégantic industrial park to allow rail operations from Nantes and Frontenac to be relocated there, “thereby maximizing rail safety.” This component, announced in August 2019, is in response to the request from the mayors and the community of Lac-Mégantic.

“The selected route removes the rail right-of-way from downtown Lac-Mégantic and reduces the number of buildings near the railway,” Transport Canada noted. “This route was recognized as the most advantageous one by the Bureau d’audiences publiques sur environnement du Québec (BAPE) and as having the least impact on agricultural land by the Commission de protection du territoire agricole du Québec (CPTAQ).”

CP is responsible for bypass plans, specifications and construction. In the fall of 2021, plans and specifications passed the 30% progress level and were submitted to the Canadian Transportation Agency to initiate the project approval process. As of April 2022, the plans have reached the 70% progress level. The plans and specifications phase also includes the completion of soil and water quality, noise, vehicular traffic, fish habitat and private drinking water source studies, as well as archaeological inventories.

The Government of Canada, in collaboration with the Government of Quebec, will implement monitoring mechanisms “to ensure that the project meets the expectations and requirements for both levels of government.” Transport Canada hired the engineering firm CIMA + to provide support for this purpose.

Once the bypass is in operation, the existing track between Nantes and Frontenac will be dismantled and transferred to Transport Canada. “Decontamination work may be carried out depending on the intended use of the land,” Transport Canada said. “The Government of Canada intends to transfer these lands to the municipalities for public use.”

Watch a 3D animated video of the Lac-Mégantic rail bypass: