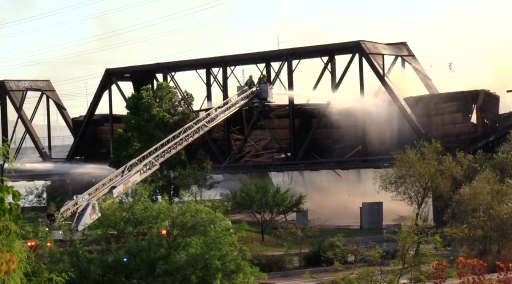 Union Pacific is getting ready to repair the section of bridge that collapsed following a derailment in Arizona.
Arizona Republic

The Tempe, Ariz., rail bridge that partially collapsed following a train derailment on July 29 was the site of another accident a little more than a month earlier. However, the derailment was so minor even Tempe’s mayor was not notified of it.

When asked at a news conference what he thought about the two accidents so close together, Mayor Corey Woods admitted he just found out about the June 26 event. Twelve Union Pacific cars left the track that day, and damage was sustained to the rail ties due to a fire. The line was reopened the following morning and residents were told it would be closed for two days for repairs, but the accident was not made public.

Investigators are on the scene now trying to figure out what caused the July 29 derailment. The National Transportation Safety Board is looking over the accident scene, and the Arizona Corporation Commission sent a hazmat official, track inspector and mechanical inspector.

Early observations suggest the derailment may have caused the partial bridge collapse.

City officials are working with agencies at the local, county, state and federal level to monitor water quality following the accident. Rail cars fell on the road below, not in the Tempe Town Lake.