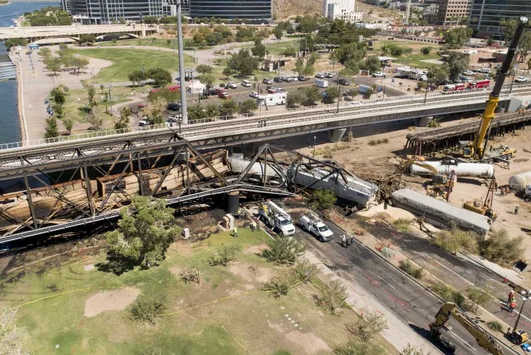 The new section of the Tempe, Ariz., rail bridge will not look like the existing bridge, which was built in 1912.
Arizona Republic

The rail bridge that partially collapsed after a derailment in Tempe, Ariz., may be back open to Union Pacific traffic by Friday.

Crews have begun working on a foundation that will support the new 450-ft section. The segment will replace the portion of the bridge that failed during the derailment and another section that was demolished after the accident.

The city of Tempe wanted the repaired portion to look like the original 1912 steel trestle bridge, but Union Pacific says the new part will be constructed using concrete and steel girders. The look will reflect other UP bridges in the region, but will not resemble what is perhaps the oldest bridge in Arizona.

Girders have been delivered to the jobsite and cranes will be used to lift the girders into place. The track will be constructed once the structural work is complete.

Union Pacific wanted to tend to a 133-ft section of damaged bridge that crosses the Rio Salado Parkway on Aug. 11, but will now wait so that the Arizona Corporation Commission can approve the Class 1’s application for construction. Union Pacific cited an exemption in the Arizona state law that allowed work to happen without the commission’s approval because existing track was being replaced. The Corporation Commission disagreed, so Union Pacific has that portion of the project on hold until it gets word of approval.

The Tempe rail bridge is essential to Union Pacific operations. It serves as the key route in and out of metro Phoenix.

Union Pacific also plans to rebuild the part of the Rio Salado Parkway that was damaged following the derailment.