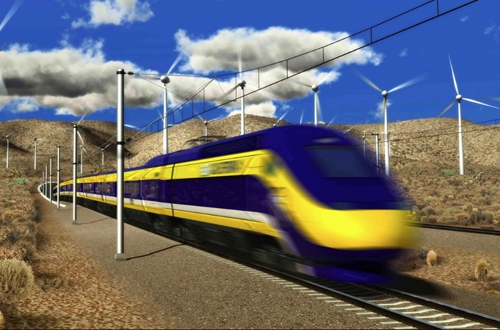 The Garces Highway Viaduct in California is now complete.

The agency announced a 30-year contract to place track, install high-voltage electrical lines, produce a digital signaling system and construct a heavy maintenance train garage. The San Jose-to-Bakersfield track is half of a proposed line running from Los Angeles to San Francisco.

The FRA says current construction packages are facing significant and continuing delays and that the authority cannot handle another design-build contract. A day after receiving notice from FRA, the high-speed rail board voted to open up the bidding process. A winning bid could be determined in 2020, with construction starting as early as September. Three teams will attempt to win the work, and construction would be divided up into five different phases.

However, the project could run out of funds in a year, placing financial stress on the California state legislature. The project did receive two grants under the Obama administration worth $3.5 billion. The U.S. DOT revoked a 2010 grant of $929 million because it was not used. California sued to reverse the decision. Another $2.5 billion could be pulled because the U.S. DOT says California violated the agreement.

California High Speed Rail Authority work is behind schedule, with only a third of bridges, viaducts and other structures under construction. The line was supposed to be finished in 2017 and cost $6 billion. Now the price tag is $10.6 billion.

To help speed up construction, California wants to lay down track in non-continuous 5-mile sections, but the FRA is against the idea.