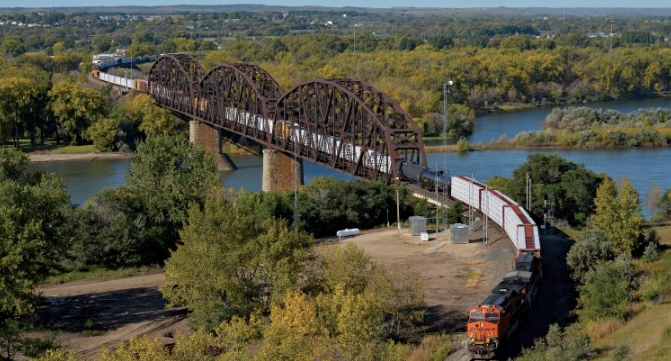 Another player has entered the game involving the preservation or destruction of the Bismarck-Mandan Rail Bridge—the state of North Dakota.

According to the Friends of the Rail Bridge, a group that is trying to keep BNSF from demolishing the 139-year-old span the crosses the Missouri River, the state is actually the owner of the bridge, not the Class 1 company.

The claim is backed up by the Equal Footing and Public Trust Doctrines, which guarantee that all states that enter the union are on the same footing as the original 13. Under the Public Trust Doctrine, the state owns and protects certain natural resources for public use.

Friends of the Rail Bridge believes Congress held in trust navigable rivers like the Missouri and any structures in the riverbed even after the Northern Pacific Railway (now BNSF) was given permission to build a railroad in Dakota Territory in 1864. Friends is claiming North Dakota assumed ownership of navigable rivers from Congress when it became a state in 1889. Since Congress did not transfer ownership of the bridge to Northern Pacific Railway before the state became official, the state is the owner of the rail bridge.

BNSF is looking into this latest claim. A request has been made for an attorney general’s statement on the ownership. Meanwhile, the Coast Guard and BNSF are expected to meet in the coming weeks.