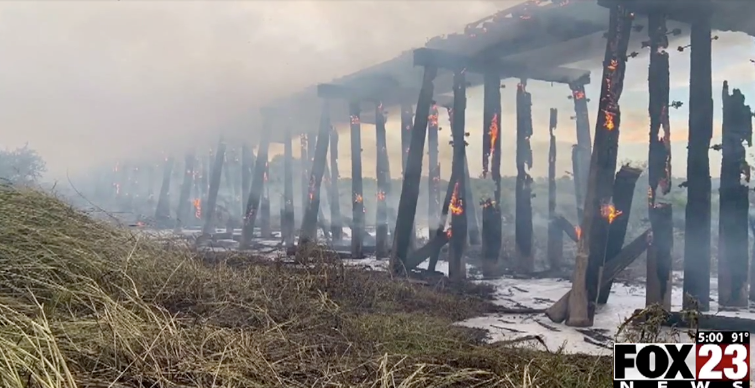 Montgomery County, Kan., has issued a disaster declaration for a railroad bridge that was destroyed by a fire earlier in the week. The hope is the county will receive federal dollars to help replace the 500-ft span. The damage has been estimated to cost up to $4 million.

A total of nine agencies worked to extinguish the fire. Director of Emergency Management for Montgomery County Rick Whitson said first responders arrived at the scene around 5:30 p.m. on June 24. A 75-yd section of the bridge initially caught on fire.

Southern Kansas and Oklahoma Railroad is believed to be the owner of the bridge. The track line runs from Kansas to Tulsa, Okla.

Officials are still trying to determine the cause of the fire, and say it could take months to replace the bridge.

Crews were out removing sections of the bridge on June 26 while smoke was still visible.

“This is not a common type of fire that we have,” said Montgomery County Emergency Management’s Lee Miller told Fox 23 news. “The fire was brought under control and contained, but the nature of the wood and creosote trestle fire you can’t extinguish it without using a very large amount of foam, at which point it became impractical to do that.”