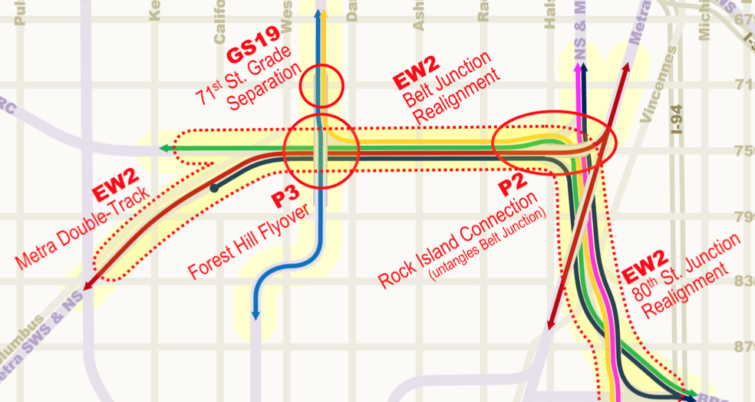 The Forest Hill Flyover project will construct a bridge to eliminate conflicts between train movements.

The groundbreaking also kicked off construction of the 71st Street Grade Separation (GS19) project, which will eliminate an existing grade crossing of the CSX railroad with 71st Street, improving safety and convenience for community members including pedestrians, bicyclists, and local drivers. These projects also are the first two components out of four major projects that will be implemented as part of the 75th Street Corridor Improvement Project (75th St. CIP).

The estimated total cost for the Forest Hill Flyover and 71st Street Grade Separation projects is $380 million. In 2018, the U.S. DOT awarded $132 million to the CREATE Program partners through the Infrastructure for Rebuilding America (INFRA) grant program for the 75th Street Corridor Improvement and Argo Connections (B9) projects. The federal investment, combined with $260 million in state, local, and private funding, will support the construction of the Forest Hill Flyover (P3) and 71st Street Grade Separation (GS19) projects.

Metra trains cross freight train tracks at several locations within the 75th St. CIP footprint, including the Forest Hill Junction. During peak commuter periods only Metra trains are allowed to run in these areas. As a result, freight trains, and sometimes Metra trains, may encounter lengthy delays. This project will seek to remove those delays and increase fluidity.

The accompanying 71st Street Grade Separation (GS19) project will solve conflict points at this rail-rail crossing, where pedestrians, bicyclists, and drivers using 71st Street must currently wait for trains to pass. This crossing also presents a safety risk for drivers and pedestrians which will be ameliorated by the GS19 project.

The 75th St. CIP is the most complex piece within the overall CREATE Program and is a group of four projects that were advanced as a singular project due to their logistical and environmental similarities. This rail and roadway improvement project is located on the south side of Chicago in the neighborhoods of Ashburn, Auburn Gresham, Englewood, and West Chatham along two passenger and four freight rail lines.

The P3 and GS19 projects have linked stage 1 construction work schedules. The Forest Hill Flyover (P3) project construction is scheduled to take two years. Substantial construction will begin in October 2022 and completion is anticipated for 2024. The 71st Street Grade Separation project is closely interconnected with the P3 project, therefore, there are design efficiencies if the projects were done in tandem. After P3 construction is complete, a second section of GS19 will begin construction in 2024. It is two of 70 projects in the CREATE Program. The CREATE Program is a first-of-its-kind multimodal public-private partnership to improve the rail and roadway transportation network within the Chicago region. To date, 33 CREATE projects have been completed, with four more projects under construction and 15 in various stages of design.