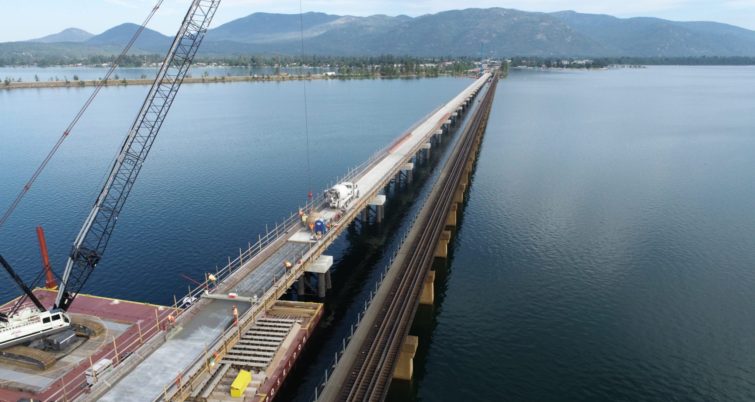 BNSF has been working for the past few years on the construction of a second railroad bridge called the Sandpoint Junction Connector, and the installation is running ahead of schedule.

During the past two months, crews completed the bridge girders, curbs, and decks and continued to lay track, as well as tackle miscellaneous items like waterproofing and handrails.

In November, BNSF plans to put the new bridge into service and begin an important maintenance program on the existing rail bridge. Both of these bridges run over Idaho’s Lake Pend Oreille (Idaho’s largest lake) through Sandpoint, which is located in the northern tip of the state, approximately 50 miles from the Canadian border.

The second span will reduce a bottleneck for traffic, as trains will now be able to move in both directions.

According to the Spokesman-Review and Yahoo News, Lena Kent, public affairs director for BNSF, said “About 60 trains pass through Sandpoint every day. In addition to freight, the bridge serves the Amtrak passenger Empire Builder route from Portland and Seattle to Chicago.” Kent added “The upgrades will reduce congestion and help move our current freight traffic more efficiently.”