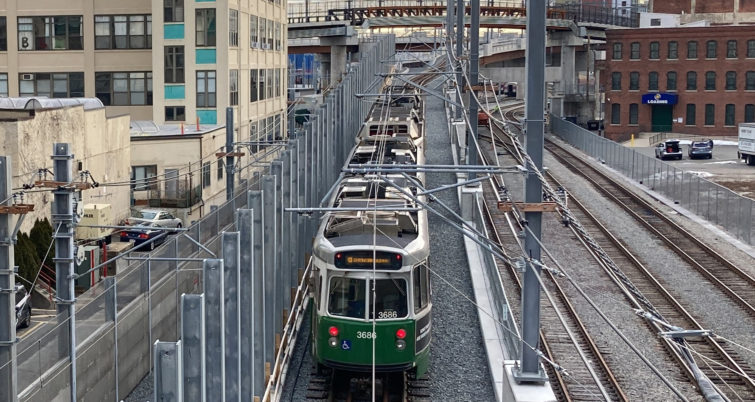 The MBTA announced that service on the Orange Line and Green Line Union Square resumed on Sept. 19.

The MBTA initiated the 30-day full-closure of the Orange Line on Aug. 19 to complete five years of improvements in 30 days and bring track and signal infrastructure into a state of good repair, while also addressing safety actions identified by the Federal Transit Administration (FTA).

Orange Line track replacement work addresses FTA Special Directive 22-4, which mandates that the MBTA take actions related to Maintenance of Way. In Directive 22-4, the FTA noted that defective track conditions had forced the MBTA to implement slow zones where trains had to operate at restricted speeds. By replacing thousands of feet of rail during the Orange Line closure, the MBTA is eliminating the slow zones, and providing riders with faster and more reliable service.

“A tremendous amount of choreography, coordination, and hard work has been accomplished during these 30 days, including over a dozen projects to replace rail, track, signals, rail fasteners, and more that would have taken the T five years of nights and weekends to accomplish,” said MBTA General Manager Steve Poftak. “Thank you to all of our partner municipalities along the Orange Line for collaborating with us throughout the entirety of these 30 days.”

·       Elimination of six slow zones to allow for faster service at Jackson Square and Stony Brook, State and Downtown Crossing, Tufts Medical Center and Back Bay, Community College and North Station, and two slow zones between Assembly and Wellington along the Dana Bridge;

·       Upgraded signals at Oak Grove and Malden Center from analog to digital to reduce time and maintenance; and

·       Upgraded two crossovers at Ruggles and Jackson Square so trains can seamlessly move between tracks.

·       Adjustments to the overhead wire on the East Cambridge Viaduct that eliminated a temporary slow zone, allowing trolleys to operate at the system’s designed speed of 25 mph on a permanent basis; and