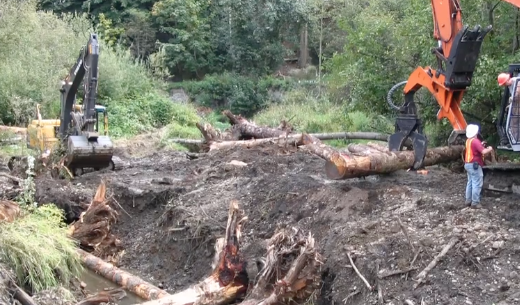 A crew takes on restoration efforts at Squalicum Creek.

Rail lines and water lines are both important in Bellingham, Wash.

So important that scientists are trying to figure out a way of restoring critical salmon habitats without disrupting the railroad, which is active due to the region’s port activity. According to the 2020 State of Salmon report, Chinook salmon are “in crisis” and habitat degradation is one of the top reasons the fish is in decline. The railroad blocks access to streams, reduces the size of estuaries, and impedes the delivery of sediments and large wood to the shoreline.

The first step in the research was to determine priority sites, with the first being Bellingham’s Squalicum Creek. Fish can move up the railroad crossing there, however it requires a large jump into sometimes very shallow water.

Five stream mouths were listed as the most important for the study, including the one at Squalicum Creek. Mouths will be given different treatments ranging from larger culverts to intensive construction. Squalicum Creek’s mouth is the most complicated.

The railroad at Squalicum Creek is a dead-end spur track that diverges from the mainline, which serves the Port of Bellingham. The route includes a railroad bridge of historical importance. Work will need to be done on two other bridges upstream. If the estuary is to be improved it needs to be larger, requiring longer bridges.

Designs and funding are still in the developing phases, and construction probably will not start until 2025.

BNSF owns the line and has been involved in the planning process from the beginning. BNSF would prefer multiple projects to be done at once to limit track closures.