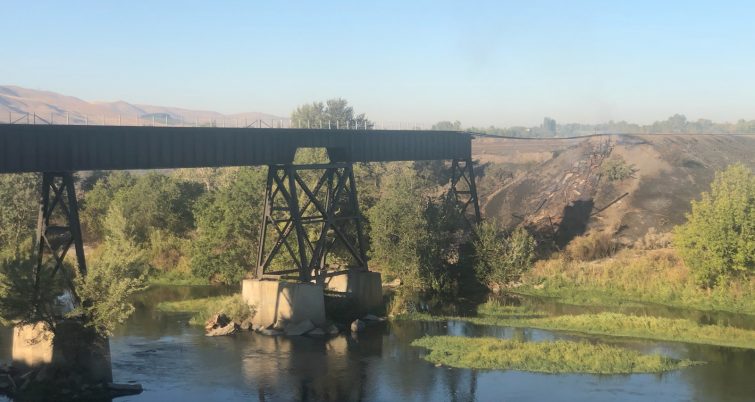 The state of Washington is asking for an emergency declaration for the bridge that crosses the Yakima River. Fires destroyed the bridge a few weeks ago.

The state of Washington is requesting an emergency/disaster declaration and related assistance from the federal government (i.e.,the Federal Emergency Management Agency—FEMA) regarding a critical rail trestle & bridge that crosses over the Yakima River in Benton County near Prosser, which was destroyed by a wildfire in September. (https://www.yaktrinews.com/train-bridge-over-yakima-river-between-prosser-benton-city-blaze/).

In a recent letter to FEMA, Washington State Governor Jay Inslee wrote: “I request that you declare a major disaster for the state of Washington as a result of severe drought and the extensive damages incurred by extreme fire behavior and straight-line winds beginning Sept. 1 through Sept. 19, 2020 … In Benton County, a nearly 100-year-old railroad bridge was fully engulfed in flames and destroyed by one of the many rapidly moving wildfires. Firefighters were focused on saving lives and people’s homes and were not able to save the structure … which spanned the Yakima River. The historic bridge was used as a critical transportation corridor to ship agricultural products in the region.”

In particular, this vital rail trestle/bridge is used to haul all kinds of freight from/to Yakima and Benton counties, and impacts many shippers in three port districts (Port of Sunnyside, Port of Grandview and Port of Benton), several central Wash. communities (Prosser, Grandview, Sunnyside, Granger, etc.) and about 3,600 rail carloads (~14,500 truckload equivalents) of shipments annually. Products and cargo that are shipped over this rail trestle/bridge serve many industries in the area, including the dairy industry, the hop industry, the grape industry, feed for many livestock operations, as well many other agricultural and food growing, processing and/or shipping operations.