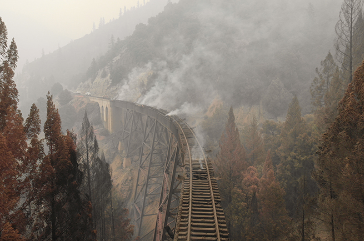 The Dixie Fire is responsible for the destruction of over 963,000 acres in northern California, and according to fire officials it is now 94% contained.

That’s good news for BNSF, which is expecting to have a portion of its Gateway main line back in service by late October.

Some of the Class 1’s property was part of the 963,000 acres that succumbed to the fire. Two bridges and a tunnel were damaged between Stockton, Calif., and Klamath Falls, Ore. The Gateway Subdivision has been out of service since July 21 while crews make the necessary repairs.

BNSF says Tunnel 4 should be open in the next week or so as work is wrapping up on the roof and walls. The two bridges that were damaged were at Mileposts 199.66 and 198.5. Both spans had steel spans and substructures, so the only sections that needed replacement were the timber decks.

During the repairs, BNSF has rerouted traffic through Denver, Amarillo, Texas, and Barstow, Calif.