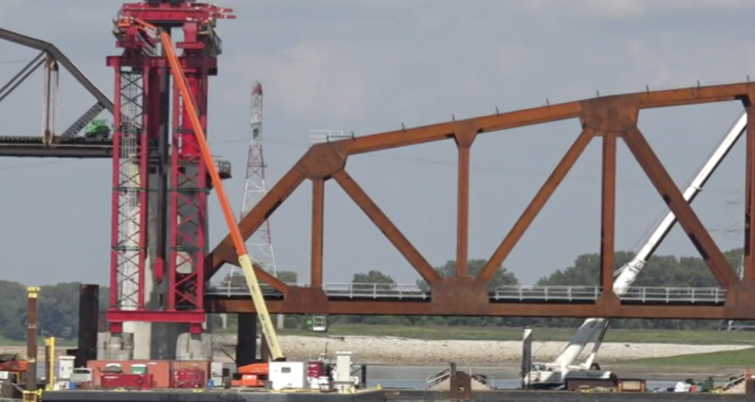 The original Merchants Bridge was built in 1890. The new one will have double the capacity.

It takes a milestone whenever you are dealing with the mighty Mississippi River, and the Terminal Railroad Association of St. Louis and contractor Walsh Construction hit one over the weekend.

The first of three mammoth sections of the Merchants Bridge was lifted into place. The 9 million-lb piece was floated onto the river and then hoisted by cranes into its final resting place. The original Merchants Bridge was built in 1890 and connects St. Louis with Venice, Ill. Crews are using a 10-day track outage to connect the piece and lay the track.

The new bridge will be double-tracked which will increase capacity and result in fewer delays. Officials debated on whether to just maintain the existing bridge or start anew, and the decision was to build fresh at a cost of $222 million.

Workers also will be seismic retrofitting the piers of the bridge. The project is expected to be completed in 2023.