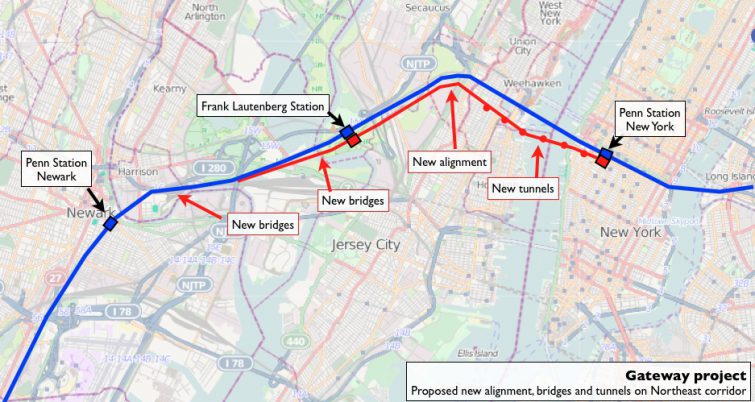 Federal funding for the Gateway Project could be in place by the end of this year.

A baby step is better than a crawl.

For years, the Northeast Corridor has been hampered by delays and slow movement, but on July 5 the states of New Jersey and New York hit an important milestone for the Gateway Project, even though some consider it a baby step.

The governors of New Jersey and New York signed a phase one Memorandum of Understanding for the Gateway Project, which will involve the construction of a new Portal Bridge and tunnel underneath the Hudson River, as well as the rehabilitation of 111-year-old rail tunnels. The MOU outlines how much each state will pay for the project, which is a critical move towards obtaining federal funding.

New Jersey and New York will each provide just over $386 million in funding for the Portal Bridge, which is already under construction. The deal also calls for the Federal Highway Administration to pay $57.1 million and Amtrak to provide $261.5 million. State funding portions for the tunnel work have yet to be decided, but the Port of New York and New Jersey will be responsible for $2.7 billion worth of phase one work.

“[The MOU] marks a pivotal milestone toward the completion of the most significant transportation project not just in New Jersey, but in the entire United States,” said New Jersey Gov. Phil Murphy. “As we proceed with the construction of a new tunnel under the Hudson River, we advance one step closer toward a New Jersey that is better connected and better positioned to reap the full economic benefits of our status as a regional crossroads.”

New York Gov. Kathy Hochul added, “We are establishing the framework to get this project over the finish line and are making good on our promise to modernize the state’s transportation infrastructure and create a mass transit system worthy of New Yorkers.”

The MOU could help establish federal funding by the end of this year, and tunnel construction could begin as early as next year, but it will more likely begin in 2024.